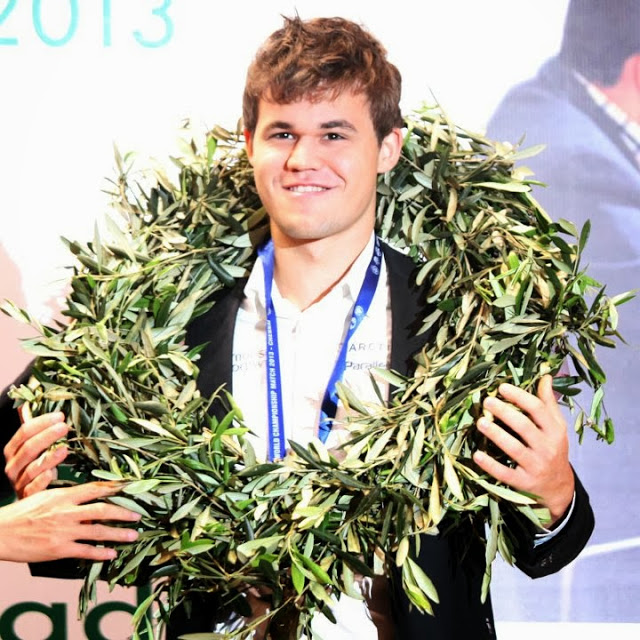 The 2013 World Chess Championship drew millions of viewers worldwide, even during the wee morning hours to watch the gripping games being played out match by match in Chennai India. While starting slow for the first several games, Carlsen took a decisive lead in the match, and sealed the championship with a draw in game 10 to be the youngest World Champion at age 22.

“Anand, a chess Grandmaster from India, won the World Chess Championship five times, 200, 2007, 2008, 2010 and 2012 and has been the undisputed World Champion since 2007. Anand became India’s first grandmaster in 1988 and the first recipient of the Rajiv Gandhi Khel Ratna Award in 1991-92, India’s highest sporting honor.” Anand’s list of accolades continues but he has a challenge on his hands with Magnus.

Carlsen is a chess grandmaster from Norway and former chess prodigy. His peak rating is 2872, the highest in history and he is the 2009 Blitz chess champion. At the young age of 13 years 148 days he became a grandmaster, then the second youngest, now the third. At the age of 19 years 32 days, he became the youngest player to be ranked first in the world. He is only the fifth person to receive a Elo rating over 2800 from from FIDE rating list. Carlsen has recently branched out from chess to model, being the star model in G-Star Raw’s Autumn/Winter 2010 advertising campaign.

Flashback: The 2005 Magnus Carlsen DVD “Prince of Chess” is a fascinating look into the youngest grandmaster’s life. Clearly this 2013 championship is a lifelong dream come true. Receive the DVD free with any order of $20+. Use the coupon code MAGNUS.

Check out the DVD and watch a trailer here