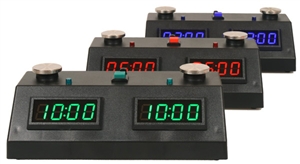 In playing with it, I see that it does break down and shows seconds when under 60 minutes (1 hour).  That is nicer than the DGT and Saitek clocks which only do this under 20 minutes.

I don’t think this clock is as nice for longer time controls compared to the Chronos models.  We have an upcoming Peoria City Championship that is G/80, 5s d.  I plan on using either my Touch Chronos II or the Button Chronos II for this event (we will play one game each Monday evening for about 6 weeks or so), and most likely will use the Touch version for most of the games.  I have used my Chronos GX button clock for this time control and it is fine as well.  Both the Chronos II and GX models show the seconds at this time control.

The brightness of the Zmart is interesting and kind of nice.  I am happy that I got the Red as the red light is less light bleaching to the eye compared to the green or blue.  As we discussed, pilots and others that need to see to read in the dark, while not bleaching out their vision for dark vision, use a red light as that is best for this.

I found the sound “beep” to be very acceptable in play.  It is not too loud or highly pitched to bother anyone, and the audible sound is similar to the click we hear when depressing a button or levered chess clock.

I received mixed emotions on the say this clock counted down the delay, flashing back and forth between the delay time left and the game time left.  Some thought it was kind of nice, but a few thought is was a bit nauseating.  Of course it is not common to watch the clock during the delay time anyway.  Pretty much everyone I know is looking at the board for those seconds.

I found the move counter to be a bit strange.  Seeing that I don’t play in events that require this, it doesn’t bother me.  And if I do play in an event with the various time controls, I will use my Chronos clock(s) or the DGT 2010 if it is a FIDE event.  Those clocks work just fine with their counters.

I do like the power switch and its location on the clock.  The clock cannot be accidentally turned on as with the Chronos or DGT clocks by a button being depressed.

It did take a little to get accustomed to setting this clock, but once learned it is easy, and the learning time was in minutes.

I really only use 3 of my preset time slots on my Chronos, so the ZMF-II having 3 slots to save time controls is fine.